So here we are, the final face off between Barry, Eobard, August and the evidently unstoppable Paradox, after last issue with Reverse Flash telling Barry the only way to defeat Paradox was to kill him before he became the monster in front of them we find out how the Flash deals with that predicament, cos Barry can’t save everyone, can he?

This issue was a very suitable finale, lots of splash pages, big action panels and twists and turns throughout! I’ve loved this story arc its really put Barry in awkward position having to rely on Eobard and trusting August while giving him a seemingly impossible decision. the artwork in this issue has been sublime, I like how different artists have worked together to make this whole arc feel cohesive and when its put together in a graphic novel it will be flawless.

So I would love to talk about what comes next but that would be massive spoilers for the end of the issue, so all I’ll say is, yes I am in for the next story, I’m looking forward to what and who’s coming!

One thing I have decided is that I’m going to change how I review comics, it can be quite difficult to talk about whats going on in each issue without spoilers, so I’m going to start reviewing comics by arc rather than issue, it will mean these reviews aren’t as frequent but they will be more complete reviews of a whole story which I think will give a better overview, it will also give me more time to review more titles……

This issue gives us something you don’t expect, Flash and Reverse Flash running buddies? Say it ain’t so! But the only way Flash can stop Paradox is with the help of Eobard Thawne, but is it the sort of help Barry wants? Together can they stop the biggest threat to not just Central City but the whole Multiverse,

Well this issue goes at a mile a minute quite literally, I mean what more would you expect from two speedsters together. last issue I said I wanted more Reverse Flash and this issue gives me it, it’s very interesting to see two mortal enemies work together, it’s a classic trope of storytelling and is done here to perfection. Obviously it was never going to be as easy as just the two of the team up and they save they day, where’s the fun and drama in that? And this sets up what’s to come next nicely.

Where does it all go from here? Can these two adversaries stay on the same page long enough to do what must be done and where does it leave them? Will they find some common ground to build something new or will it all come crashing down and take their epic rivalry to new heights? I guess we’ll just have to wait and see, one thing’s for sure it won’t be over in a flash………I’m sorry, I had to haha.

This issue is all about Reverse Flash! As a Flash villain Eobard Thawne is one of my favourites and we get lots of him in part 4 of The Flash Age, the fight to take down Paradox is on and Barry Allen needs Eobards help to defeat him, the only issue is where or indeed when to find him!

I loved this issue we get a big progression in the story with what Paradox is doing but also some classic Flash storytelling revisiting elements from Barry’s past that remind you just how important Reverse Flash is not only to the Scarlet Speedster but the entire Multiverse.

The artwork in this issue is stella, the first splash page we have is this beautiful shot of Reverse Flash and it is just sublime, it doesn’t stop there, all the way through each panel is awesome and it really helps draw you in to the story more. 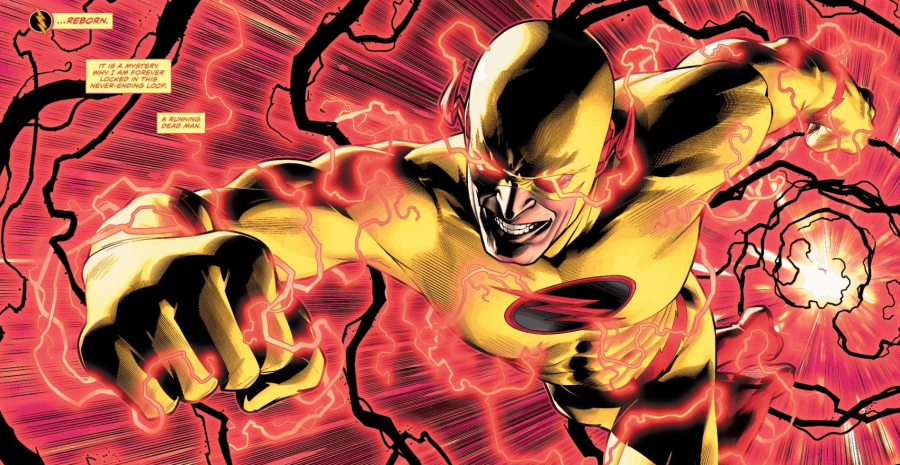 I’m loving this story and I’m looking forward to where the next issue takes us, more Reverse Flash please!!

This issue jumps straight into the action, following on from the end of #750 with Godspeed leading Barry to Paradox who then forces the two speedsters to fight! Meanwhile Iris is trying to find any info she can out about Paradox from Commander Cold in the Flash Museum, but all is not what it seems as August (Godspeed) turns on Paradox to team up with The Flash to try and take down Paradox, but even with their combined forces its not enough to take down the new big bad and both are dealt with fairly quickly with Barry caught in Paradox’s bean and waking up in a field with his mum?? Iris however discovers that they’re going to need help from the only person in time to ever defeat Paradox, Reverse-Flash!!…….

This issue was awesome, I love a full on battle in comics especially when it involves speedsters but also with Iris doing her thing at the same time, it’s everything I love about the Flash. The artwork is great, Christian Duce (Artist) really gets Barry and August and their looks are perfect, however my favourite thing is how Iris is drawn in this issue and the one panel where she’s screaming Barry is just amazing, giving us all the emotion you’d expect from Iris. 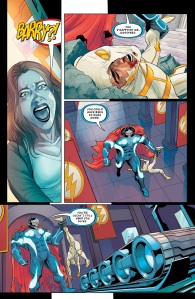 Overall #751 is a fun issue in this building story and really makes me want to read the next one, which is the sign of a great comic, so bring on The Flash Age Part 3!!