Jim and Mike are with you this episode talking about comics!! We talk new Nightwing by Tom Taylor, Black Lightning – Cold Dead Hands and Green Arrow – The Longbow Hunters! So come and listen and don’t forget to subscribe!

So I mean honestly what else was there to talk about this week but the long awaited Snyder Cut! Join Jim, Rob and Michael as they pick it apart and give you their honest opinions on how the original vision of the film came out!

Also there is some Earth9 news, things are changing a little, take a listen to find out what!

So those of you that have listened to the podcast will know that this will be the last weekly and indeed written review for the site now that we are switching to a podcast only platform, I cannot thank all the writers enough for their hard work and continuing contributions to the site, some of them will be popping up on the podcast in the future but also be sure to follow them all on Twitter so you can keep up with this bunch of wonderful people! 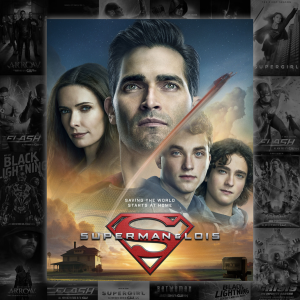 Season 1 Episode 5 ‘The Best of Smallville’

There’s loads of references to things again, we get that Smallville was founded in 1949, which I think falls in line with the comics so that was cool. There’s still so much to learn about the characters, and Captain Luthor in particular, for me.
But we continue to get to know the characters, and I’m looking forward to see where it goes and how everything is going to develop.
It’s a shame the show is taking a break (thanks COVID), but I look forward to.its return.

This series continues to impress with its stunning visuals, exciting action, and compelling storytelling. The episode serves as a spring finale of sorts as the series goes on hiatus until May 18th. In typical finale fashion, it delivers another exciting bombshell in Captain Luthor’s backstory. The fact that he was married to Lois on his Earth will surely add an interesting twist to the story moving forward.

The Clark flashbacks were incredible as well. This show has done a fantastic job of presenting Superman as a relatable character despite his incredible powers. Tyler Hoechlin’s portrayal of this iconic character is quickly becoming my favorite version. I am looking forward to seeing the rest of the season!

Superman and Lois delivers again this week in an episode titled ‘The Best of Smallville’, which turns out to be Martha Kent. We get a little more insight into what life was like for Clark after his dad died and his struggle to find his place in the world. As we know from the Superman mythos, he decides to leave Martha and Smallville to pursue his destiny. Now he is an adult with a family Clark looks back and wonders if he did the right thing by leaving Martha so early, missing out on time with her.

There is a little more development in the ongoing villain story threads, even though Morgan Edge doesn’t appear in the episode we learn a little more about the experiments he is conducting using meteor rock from the mines. Captain Luthor is back however, and he is tracking Lois Lane in order to find Superman. I was quite surprised at the end when it was revealed that on his Earth, Captain Luthor was married to Lois! Such a shame we have to wait 7 weeks to the next episode as it feels like we are just getting started.

Jim – Now this felt like the first episode of a new season! Everything reset, the team back together ready for what’s to come and they didn’t have to wait very long! I really like Abracadabra as a villain, due to him knowing so much of the future it gives us glimpses as to what’s to come and that’s always exciting!

Flash always does emotion so well and this episode was no different, showing how people are struggling with being abducted into the mirrorverse and having full on therapy for it and with Iris actually admitting she is struggling too just adds more dimension to her, hopefully she’ll be back to old Iris having her own stories rather than just point woman on team Flash.

Justin – This episode is easily my favorite of the season and perhaps the series so far. Twists, turns and revenge made this episode quite exciting. I thoroughly enjoyed the drama surrounding Safiyah, Alice, and Ryan. “Survived Much Worse” wrapped up this first arc of the season well while teasing more intriguing things to come namely the return of Kate Kane. The former Batwoman will now be portrayed by Wallis Day (who played fan favorite Nyssa-Vex on Krypton). I’m looking forward to her in this role. It will be interesting to see how Kate’s story continues and how it affects Ryan’s.

Can’t wait to see where the story goes from here!

Things are ramping up with DCTV, Batwoman and Black Lightning this week!

Rob – What I want to know is how did little Ryan resist eating all those jelly beans on day one???

I like Ryan and Mary bonding and becoming friends. I wasn’t enjoying the backstory at first but it gave more substance to Ryan and her reasons for wanting to be Batwaman and it’s genuinely Javicia that’s keeping my interest in the show at the moment.

Alan – We’re back for the fourth episode of Batwoman, and I’m still liking it so far.

This episode tried to do multiple plot points all woven together, but I’m not sure how well that worked. The opening started off with a  whole drugs plot line, which then seemed to not really go anywhere, and we still have the looking for Kate hunt. I’m, not sure where they are planning on going with that, but I feel like it’s not going to pay off, because we already know Ruby Rose is very unlikely to come back.

I did very much enjoy that we got a lot of Ryan’s backstory and her childhood showing how she was kidnapped by someone who is still operating. There were references to Batman and Joker in this backstory, and we find out that she was a comic book kid. Which also shows id DC Comics is at thing in this universe, as is the Green Lantern Corps, in comic form at least.

I felt there was very little actual Batwoman in this episode, it was only really right at the beginning and then the end, but that was fine. We also look like we could be heading towards and alliance, at very least and acceptance from the Crows that Batwoman is helpful.

Overall while there were elements, I wasn’t sure on, I enjoyed this again, and will continue to come back next time. Final thought, is Ocean Black Mask?

Justin – Batwoman is back after a brief one week break (due to the Superbowl) with another great episode! This fourth chapter of Season 2 sees Ryan recall a painful part of her past as she sets out to find a missing kid. Our new Batwoman is such a fascinating character. Ryan’s latest mission further cements the kind of hero she has set out to be: a hero for the overlooked. The series is doing an incredible job of depicting real life issues while still providing an element of fantasy and escapism.

This was yet another stellar episode of Batwoman! Ryan is truly coming into her own as Gotham’s hero. Using her own past experiences, she is able to reach those that Kate necessarily could not. It is powerful to see a hero that champions those that are overlooked by society. Ryan’s backstory continues to be powerful and compelling.The Candy Lady proved to be an unexpectedly menacing side villain. I also loved the dynamic between Sophie and Alice in this episode. I am curious to see who is able to track down Kate first, that is if she is even alive.

I am looking forward to what’s next!

Justin – Dark are the days in Freeland. It seems that this is the new normal for the city and its people. This second chapter of the final season sees the Pierce Family and the city of Freeland continue to deal with the pain, grief, and the rising gang warfare. Jefferson continues to be reckless with his abilities as he processes his grief. This puts him at odds with Gambi, who is on a mission of his own to protect the city’s metas. Only two episodes and this season is already shaping up to be a worthy conclusion to this important series. This series is at its strongest when it uses the fantastical element to elevate human stories.

As I said in my season premiere review, it is refreshing to see the series come full circle and focus on the Pierce Family and the personal quest to protect Freeland. The way the series presents moral ambiguity and what it means to be a hero continues to be fascinating. Jefferson’s recent behavior isn’t necessarily right, but you can understand his motivation. Lynn is doing things for noble reasons as well, but her methods are also questionable. This episode also leans into the strained relationships between Jefferson and his family. His falling out with Gambi was especially heartbreaking to watch. Speaking of Gambi, I am glad to see him have personal attachments outside of the Pierce family. I feel like he has earned a chance to settle down and have some love in his life. It will definitely be interesting to see how the storyline plays out. All in all, I am excited to see where the season takes us!